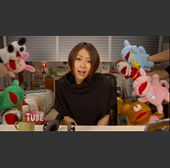 "Goodbye Happiness" is Utada Hikaru's sixth digitally-exclusive single and the second promotional track for her album "Utada Hikaru SINGLE COLLECTION VOL.2", released before her previously announced indefinite hiatus from musical activities. It is her first original Japanese release (single or album; excluding a remix of "Beautiful World") since 2008's "Prisoner of Love", more than a two and a half year gap; the longest break of her Japan-based career thus far. The track was first heard by a staff-posted audio clip preview via internet streaming on October 28, 2010.[1] Soon after on the same date, radio airplay throughout Japan was announced to begin on November 1 with Chaku-Uta Ringback Tone downloads beginning on the third.[2] Her official website was updated with the news that pre-orders for her second single collection made before November 14 would include a bonus DVD featuring the single's PV.[3][4] The single's PV starting airing on November 9,[5] with a tie-in theme commercial for Recochoku Chaku-Uta beginning the 10th.[6] It has so far topped the Hot Express Daily Airplay Japanese chart on its first day of release.[7] Eventually, the song was certified Gold by the RIAJ for full song cellphone downloads of over 100,000.