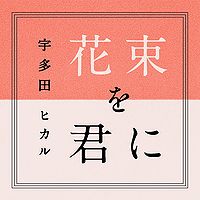 "Hanataba wo Kimi ni" is the tenth digital single recorded by Utada Hikaru, released simultaneously with "Manatsu no Tooriame". It is her first digital single released since 2012's "Sakura Nagashi", and marks her official comeback to the Japanese music scene after a five year hiatus. It was used as the opening theme for the NHK asadorama Toto Nee-chan. The drama opening version of the song was released four months later for download via Uta Pass.[1]

The song reached #1 on Recochoku digital single chart, topping the chart for two weeks at #1. While "Manatsu no Tooriame" on the other hand reached #2.[2] The song reached #1 on 107 different Worldwide charts. [3] "Hanataba wo Kimi ni" has been certified Double Platinum by the Recording Industry Association of Japan for selling over 500,000 downloads.

There are two music videos for Utada Hikaru's "Hanataba wo Kimi ni". The first video is a short animation in papercut style released on April 15th. The second video is in black and white featuring Utada, which was released on September 2nd on her website and September 16th via iTunes.