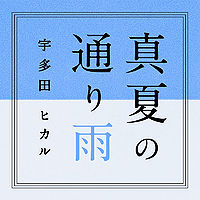 "Manatsu no Tooriame" is the eleventh digital single released by Utada Hikaru, released simultaneously with "Hanataba wo Kimi ni". It is her first digital single released since 2012's "Sakura Nagashi", and marks her official comeback to the Japanese music scene after a 5 year hiatus. The song was used as the theme for the TV program NEWS ZERO. The song reached #2 in Recochoku digital single chart, while "Hanataba wo Kimi ni" reached #1, for 2 consecutive weeks. [1] The single has been certified Platinum by the Recording Industry Association of Japan for 250,000 downloads.