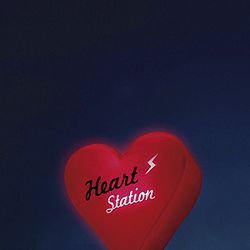 "HEART STATION / Stay Gold" is Utada Hikaru's 20th single and fifth double A-side single. "Stay Gold" was used as the Kao "Asience" CM song and is described as a lighthearted, piano-driven midtempo song. It's title was taken from the Stevie Wonder song of the same name. "HEART STATION" is described as a standard pop song using lots of expression, with the lyrics using an analogy of frequencies to the communication between hearts. First Pressing of the physical single included an original "HEART STATION" sticker. The single peaked at #3 on the Weekly Oricon charts, and charted for 11 weeks selling 80,762 copies.