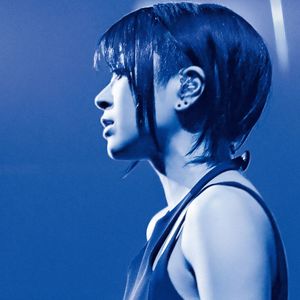 Hikaru Utada Laughter in the Dark Tour 2018 is the seventh live DVD and second live Blu-ray released by Utada Hikaru. It covers the entire finale concert of the tour which was held at Makuhari Messe on December 9, 2018. The complete limited edition comes with a bonus DVD featuring the music videos for "Forevermore", "Anata" and "Hatsukoi" as well as three documentary films that follow the music video production site aired on M-ON!, a 60-page photobook, and a replica of a back stage pass. The purchase of this packaged edition at an online shop or store came with an original neck strap while supplies lasted.

The concert is also available for download on iTunes (concert and documentary), via Pay-per-view on SkyPerfect! TV On Demand (concert only) and via subscription delivery on Netflix (concert only). The Netflix and iTunes releases received English subtitles written and edited by Utada herself, giving the songs in the set list official translations for the first time.

This release was part of her "Hikaru Utada Laughter in the Dark 2018" nationwide tour, her first national tour since "UTADA UNITED 2006" in 2006 and her first live concerts since "WILD LIFE" in 2010. Although not an official stop on her tour, Utada made an additional date in Tottori as a commemorative event for Tottori Prefecture's "Mount Daisan 1300-year-old Mountain Temple Festival" (the co-sponsor of Utada's tour, Suntory, sources water from Mount Daisan for its "Tenzensui" brand of bottled water, in which Utada promotes in commercial tie-ups).