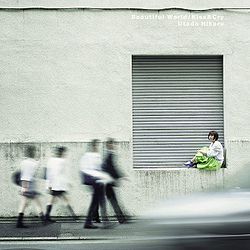 "Kiss & Cry" is a song recoded by Utada Hikaru, first released as an A-side on her "Beautiful World / Kiss & Cry" single. The song was used as the 2007 Freedom cup noodle CM song. It was first announced in late April and was released as a download at iTunes and other places on May 31, 2007, and would reach a #1 peak on iTunes' download charts. It also rapidly ascended into the Top 5 of the Chaku-Uta ringtone charts and was downloaded 300,000 times for its first month of release there. "Kiss & Cry" would go on to receive a double platinum certification for Chaku-Uta downloads from RIAJ, and ranked at #67. on the Recochoku top 100 most downloaded songs of 2007 list.

The music video for "Kiss & Cry" was directed by Shiroda Toshikata. It solely features clips from the Freedom Project anime, with the characters made to lip synch to the lyrics of the song. The music video had no scene featuring Utada or an anime depiction of Utada at all. Instead, it was a Freedom character named Chiyo singing in the backround.

There are two versions of "Kiss & Cry" to be found in Utada Hikaru's discography. These include: