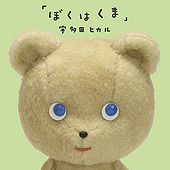 "Boku wa Kuma" is the 17th single recorded by Utada Hikaru. It was used in the television commercial break special show Minna no Uta for October and November 2006. The song is about the gigantic teddy bear that Utada owns, called Kuma-chan. The photobook from the Special Package edition was drawn by Utada herself.

In 2010, Utada outed Kuma-chan in order to show support for the LGBTQ community. It was done to show support for legalizing same-sex marriage, and during In the Flesh 2010 tour Utada threw baseballs with drawings of Kuma holding a sign that said “Legalize Gay M” out to the crowd. [1]

There are two known versions of "Boku wa Kuma" to be included in Utada Hikaru's discography. These include: