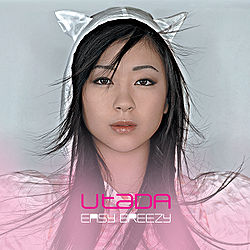 Easy Breezy is Utada Hikaru's first single under the name Utada. Easy Breezy is the lead track for Utada's English album EXODUS. This was originally released as an exclusive download single; though was later released as a DVD single in Japan. There was a promo single for Easy Breezy that was sent to radio stations that features an exclusive radio edit of the song. The cover is the same as for the DVD single. The single sold 2,731 copies in Korea. Easy Breezy was used as the Nintendo DS CM song.

Easy Breezy was the first radio single off EXODUS, and was later released as a DVD single in Japan. The PV was shot in Los Angeles, and it took two days to shoot. It was directed by Jake Nava. This was the third song that Utada wrote for EXODUS.

Though EXODUS was sung in English, the Japanese release came with an extra booklet with the translations of Utada's songs. This translation is written by Shintani Hiroko.

There are three versions of Easy Breezy in Utada's discography. These include: