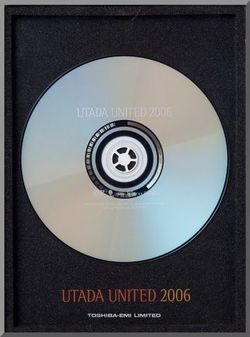 UTADA UNITED 2006 is Utada Hikaru's fifth live concert DVD (though her third full tour DVD). This DVD is billed as both an Utada Hikaru and an Utada release as it features songs from both her English and Japanese discography.

Before starting her Exodus segment of the setlists, and during outfit changes, there is a poem that plays in the background. The poem was in Japanese, written and recited by Utada herself.

Note: These are not the official names; they are fan names.

During the concert, Utada wore 4 different outfits. The first one was the "Puff Cloud" Outfit, which was a long black and white dress that drooped onto the floor. Near the shoulders, this dress seemed to puff out, or become feather-like. She sang her first 7 songs in this outfit. Then she wore a "Black Witch" outfit, which was a long, seemingly glossy dress, although not as long as the first. She sang her Exodus songs in this dress. When looked at closely, you can see that underneath it was a "Red Beauty" outfit, which was another red dress, apparently more comfortable than the 2 before it. It had strips near the shoulders, and allowed her to move more, A feature which was helpful in performances like Can You Keep A Secret? and Wait & See ~Risk~. She sang the next 8 songs in this particular outfit. The last one was a comfortable "Cotton Candy" outfit, which was very light compared to the rest. It had a very light pink top, and had a small blue skirt. In this outfit, she sang her last 2 songs, Automatic and Hikari.

One of the most noticeable features of the concert is how Utada changed outfits. When she does, there is always something that buys her enough time to change to her next outfit and to continue performing. During the change from "Puff Cloud" to "Black Witch", the Exodus Poem is played, because she needs much more time changing costumes. Contrary to popular belief, "Black Witch" and "Cotton Candy" are costumes that are not under another costume. During the change from "Black Witch" to "Red Beauty", only a couple of minutes are needed, because "Red Beauty" is under "Black Witch", and Utada just needs to take off the first costume in order to change to the next one. In the "Red Beauty" to "Cotton Candy" interval, again, she needs more time to fully change from one costume to another. At this time, the staff appears from backstage and, one at a time, bows or waves.