Can You Keep a Secret 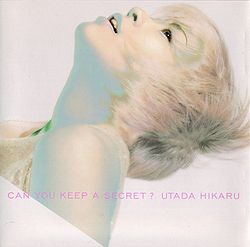 The PV features a robot called PINO. Some of the filming took place on Utada's birthday.

"Can You Keep A Secret" contains English lyrics that are not listed the booklet. They are: "Hey, can you take a time out too? I'll tell you something: but see; can you keep it a secret? Cause this guitar and this...it makes me wanna..."

There are four versions of "Can You Keep A Secret?" to be found in Utada's discography. These different versions are: