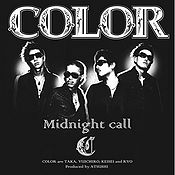 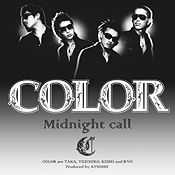 "Midnight call" is the ninth single released by COLOR. It was released in two editions CD+DVD and CD Only. The title track was used as opening theme song for the TV show Sakigake! Ongaku Banduke. The B-side "Call My Name" was used as insert song for the drama Kacho Shima Kosaku 2.

It was the only single released for their album BLACK ~A night for you~ and it was released on the same day as the DVD COLOR LIVE TOUR 2007 BLUE. The single reached #17 on the Oricon charts, and charted for three weeks becoming their first top 20 single chart since "Summer time cruisin'" in 2005. It sold 6,762 copies.