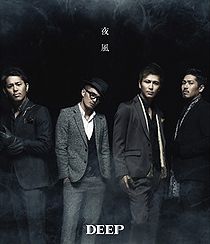 "Yokaze" is the 10th single released by DEEP (22nd overall). It was released in four editions, CD+DVD, CD Only and two mu-mo editions. The mu-mo editions only include the title track, however the "Box Edition" comes with five one-track CDs (one regular, four with individual members covers) and a 2013 calendar. The song "I Believe" is a Japanese cover of Shin Seung Hun's song of the same title, used as theme song for the Korean film My Sassy Girl. The song "Tell Me" was used as H.I.S. Hatsuyume Fair CM theme song. The single reached #14 on Oricon charts, and charted for 2 weeks.