Ohno Satoshi is a member and the official leader of the Johnny's Entertainment group ARASHI. While he is also the oldest member of the group, he gained his position as leader through a jan ken pon (rock paper scissors) contest. 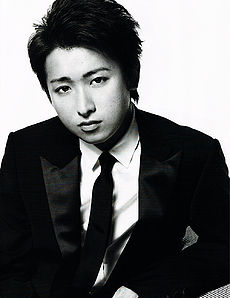 Ohno Satoshi was born in Mitakashi, Tokyo. On October 16, 1994 he joined Johnny's Jimusho as a member of Johnny's Juniors. In March of 1999 he became a member of the Junior unit that specializes in dancing, Musical Academy (MA). Ohno has also been a member of the Junior units KYOTO Oharamura, TOKYO Hamamatsucho, Yaraemonzu, TOP-J, and Junichi&JJr. On September 15, 1999 he debuted with Sakurai Sho, Aiba Masaki, Ninomiya Kazunari, and Matsumoto Jun as the new group ARASHI. Their CD debut was November 3rd of the same year with the single A.RA.SHI. After their debut, Arashi appeared on the program "Shounentaimu" and were asked to choose a leader. Ohno won a game of Jan Ken Pon (Rock Paper Scissors) and became the leader of the group. He was very hesitant at the time to take the role, as he felt Sakurai Sho would have made a better leader. He still expresses thoughts that he is not a very good leader because he has diffficulty telling people to do things such as to not be late, as he fears he might one day be late himself. Despite his hesitancy, other members often referred to him as Leader. Recently he decided that there were too many people in Johnny's also referred to as Leader, so he has convinced the other members to start calling him Captain instead.

When he first joined Arashi, he was the only member no one really knew very well. The other ARASHI members had worked together often as Juniors and had been in units together, but Ohno spent muc of his time as a Junior working in Kyoto doing plays. Fans also did not seem to know him well. Ohno has said that during their first appearance in Hawaii all of the other members got cheers, but he was received with silence. By the time they performed their first concert however, Ohno had developed a fanbase of his own. Though Ohno has been said to be the least popular member, he is the lead vocalist of the group and is very talented in dance. He has choreographed some of his own solo routines, and for ARASHI's 2006 Summer tour he choreographed some of the routines for the whole group. To this day, Ohno continues to appear in stage plays much more often than he does television dramas, usually appearing in a play once a year.

Within ARASHI Ohno is closest friends with Ninomiya Kazunari. In 2002, the two first appeared in the Shin Arashi ATARASHI-ARASHI tour as the comedy duo Ohmiya SK. The unit is a combination of their two last names and first name initials. The two sing songs, many written by Ninomiya Kazunari and do comedy routines to fill in costume change times during concerts. When they first appeared they were met with unsure fan reactions, and disapproval from the Jimusho. However, they have since become quite popular, and the Jimusho has told them they have to continue performing because of how expensive their costumes were. They still appear in most Arashi concerts, but the skits have never been filmed for the dvd releases.

Ohno attended Toukai Daigaku Fuzoku Bousei Koutou Gakkou, but dropped out mid-term. Many other idols have attended this school, including other Johnny's members Aiba Masaki, Domoto Koichi, Inohara Yoshihiko (drop out), and Machida Shingo (drop out).

Ohno's family includes himself, his mother and father, and an older sister. Ohno is said to be very close to his mother, and has mentioned that she even buys his clothes for him. It was his mother who got him to audition for Johnnys. During the auditions, he saw her outside of a window and waved to her, catching the attention of one of the people running the audition. He was asked to come towards the front and dance, and he believes this may be how he passed the audition.

Ohno is also known for his artisic talent. He has shown some of his drawings on television programs, and had a special corner on the program D no Arashi! called "O no Arashi!" in which he was challenged to select two photos at random and attempt to combine them in one drawing. Ohno has also worked with clay sculpture, and recently has expressed an interest in wood carving as well as in building a house.

See the article on ARASHI for a list of single, album, and DVD releases Ohno has been a part of.

Note: Many of these songs have been performed in concert only, and therefore do not have a CD release.