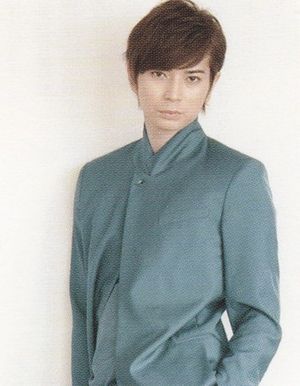 Matsumoto Jun is a member of the Japanese boy band ARASHI, a prominent award winning actor, and radio and television host.

Matsumoto Jun is one of five members of the Japanese boy band ARASHI of Johnny's Entertainment. Matsumoto is considered an elite in Johnny's, because he is one of the three in his batch to join Johnny's Entertainment without having to audition. Other elites are Nakai Masahiro and Higashiyama Noriyuki. Beginning his career as a backup dancer in Johnny's Jrs., Matsumoto Jun debuted with his fellow Arashi members Aiba Masaki, Ninomiya Kazunari, Ohno Satoshi, and Sakurai Sho. Matsumoto gained great popularity with his charm, sense of style and choice of unconventional acting roles.

Matsumoto proved his acting abilities winning Best Supporting Actor in 2002 for his role as Sawada Shin in the drama adaptation of Gokusen. In 2005, Matsumoto proved his acting skills once again by winning the same award for the second time at the 47th Television Drama Academy Awards2005 for his role as Doumyouji Tsukasa in the drama adaptation of Hana Yori Dango (花より男子), a famous shoujo manga by Kamio Yoko.

Aside from acting, singing, and dancing, Matsumoto is occupied by hosting a variety of television programs ranging from entertainment shows, community service, and music variety. He currently co-hosts the show Utawara Hot Hit 10 with Matsuura Aya. He also hosts his own radio program, JunStyle and has also expressed his talents in theatre. Most recently he has finished the stage play Valkyrie with Suzuki Anne, his co-star from Kindaichi Shounen no Jikembo 3

Matsumoto appeared on a 15th anniversary special of Yonimo Kimyouna Monogatari which aired on March 28th of 2006. He playes a college student who encounters a mysterious cloaked man who suddenly appears in his apartment. Matsumoto Jun's highly anticipated life action movie of the highly controversial and taboo manga Boku wa Imouto ni Koi wo Suru is to be released later this year. He will be playing Yori a top high school student who has deep non-botherly feelings towards his own younger twin sister.

On the silver screen, Matsumoto co-starred with his fellow band members in a movie titled Kiiroi Namida or "Yellow Tears" which was released in 2007. The movie is set during the 1960s. According to reports, "Ninomiya Kazunari will play a young man who wants to become a manga artist, Aiba Masaki a singer, Ohno Satoshi a painter and Sakurai Sho a novelist. As for Matsumoto Jun, he will play a young man from Iwate that came to Tokyo through group employement."

Mastumoto Jun is known for being very serious and professional when it comes to his work. Despite being the youngest member, he is very protective of his bandmates in ARASHI. Outside of his close friends, Matsujun dislikes being touched by strangers and is fairly aloof when in private. Despite this, however he also has great respect for the loyalty of his fans and supporters. Matsumoto has one older sister.