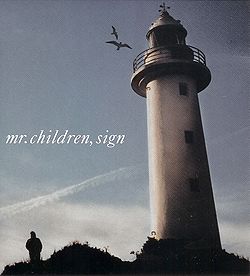 "Sign" is the 26th single released by Mr.Children. The title track was used as the theme song for the drama Orange Days, starring Tsumabuki Satoshi and Shibasaki Kou. Mr.Children won the 46th Japan Record Grand Prix for "Sign", exactly 10 years after "innocent world". The single also won Best Theme Song at the 41st Television Drama Academy Awards and Song of the Year at the 19th Annual Japan Gold Disc Awards. The single reached #1 on the Oricon weekly charts and sold 749,208, becoming the #2 single of 2004. It charted for 46 weeks and sold a total of 774,576 copies.