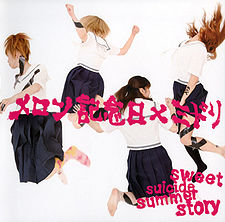 "sweet suicide summer story" is the 21st single released by Melon Kinenbi. The single is the third of five indies collaboration singles released by the group after the their graduation from Hello! Project. This single is a collaboration with Japanese rock-jazz fusion band Midori. The single's cover features the Melon Kinenbi girls in school girl uniforms, which was inspired by Midori's vocalist Goto Mariko whom always wears them. The song later appears as track #4 on the album MELON'S NOT DEAD.