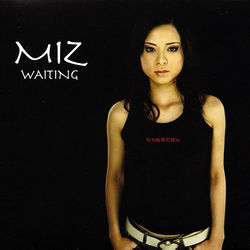 "Waiting" is the first swedish single released by Watanabe Mizuki and it's also the first released under the stage name Miz. This single features a re-arranged english version of "Waiting for" (track #2 is, in fact, "Waiting for" with a different title). The single includes a CD-Extra containing the music video of "Waiting for". This single reached #8 on Sweden's Hitlistan charts but was only in the top 60 for one week.