"Esperanza" is the fourteenth single released by Nishino Kana. The title track was used as the theme song for the TV-show Sukkiri!!. The first press edition came with an alternate cover. The single has charted in the Oricon charts for only 8 weeks. The title track has been certified Platinum by the RIAJ for full song cellphone downloads of over 250,000. By February, 2014, "Esperanza" was certified Double Platinum for full song downloads of over 500,000. 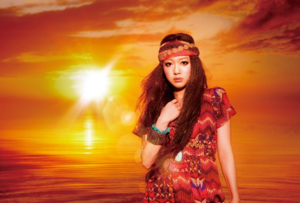