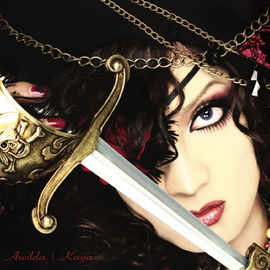 "Awilda" is the eighth single released by Kaya. It is his first single in over a year, as well as his first indies single since "Carmilla" in late 2007. Like the previously mentioned single and his latest major single "Ophelia", the title song, its lyrics, and art direction is inspired by a famous legend. This one was inspired by the Scandinavian legend of Awilda and has the overall theme of a "female pirate". Kaya's costume is a collaboration with the Lolita fashion clothing company "ALICE and the PIRATES", a sub-company of BABY, THE STARS SHINE BRIGHT.

The single reached #111 on the Oricon charts, where it charted for a week, selling 610 copies.