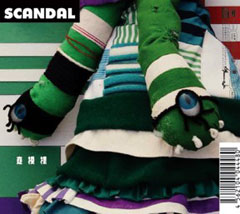 "Koi Moyou" is the second indie single released by SCANDAL. It was limited to 2,000 copies, came in a CD+DVD format only, and was exclusive to Tower Records in Japan. It was sold for US$5 on SCANDAL's United States tour. The title track was used as the theme song for the movie Corazon de Melon. The single ranked #1 on the Tower Records indie charts. It also reached #150 on the Oricon weekly charts and charted for two weeks, selling 686 copies. The DVD contains footage of SCANDAL recording "Space Ranger" in studio.

There are two versions of the "Koi Moyou" music video. The first version depicts SCANDAL as anime characters singing and playing the song against a white background. This was included on the DVD that came with "Kagerou". The second version shows SCANDAL playing their instruments and singing in a house. This version was included on the promotional DVD for YAH! YAH! YAH! HELLO SCANDAL ~Maido! SCANDAL Desu! Yah Yah Yah!~ (not sold in stores) and the DVD that came with the limited edition of BEST★SCANDAL.