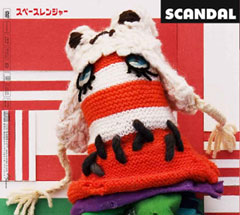 "Space Ranger" is the debut indie single released by SCANDAL. It was limited to 1,000 copies, came in a CD+DVD format only, and was exclusive to Tower Records in Japan. It was sold for US$5 on SCANDAL's United States tour. The title track was used as ending theme song for the TV program Tokoton Kyo Spo. The single reached #2 on the Tower Records indie chart. It also reached #186 on the Oricon weekly charts and charted for one week, selling 401 copies.

There are two versions of the "Space Ranger" music video: one version shows SCANDAL recording the song in studio and footage of the band hanging out together in their normal lives, while the other version was filmed against a white background in their signature school uniforms.