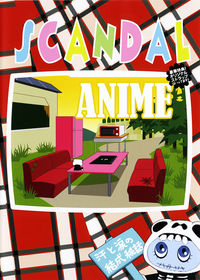 SCANDAL ANIME is the second DVD released by SCANDAL. It contains twelve anime episodes based on the band and their activities before their major debut. The episodes were originally posted on their official website. The DVD also came with a SCANDAL cell-phone strap. Because the DVD was only sold on their tour "SCANDAL TEMPTATION BOX TOUR 2010" ~YEAH! tte Iei!~ and online for a limited time at the Kitty Web Shop and the Sony Music Shop, its sales were not counted on the Oricon charts.