"SCANDAL Nanka Buttobase" is the eighth major single (11th overall) released by SCANDAL. It was released in four versions: three limited CD+DVD editions and a regular CD-only edition. All limited editions came housed in a cardboard case along with a first press bonus of a button badge. The limited editions and the first press of the regular edition also came with a special photobooklet and a greeting event application card. Each DVD contains the full version of one of the band's performances on their television show Shiteki Ongaku Jijou. The title track was written and composed by the husband-and-wife duo Aki Yoko and Uzaki Ryudo, who are known for creating many songs for Yamaguchi Momoe. The single reached #3 on the Oricon weekly charts and charted for 7 weeks. 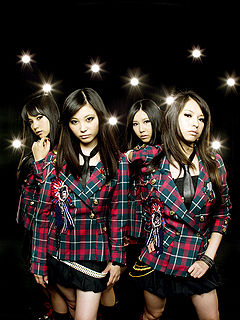