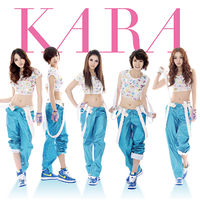 "Mister" is KARA's Japanese debut single. It was released in four editions, CD+DVD, CD + 28page photobook, and two CD only editions, first press and regular. The title track is a Japanese version of the song originally included on KARA's second Korean album Revolution, and was used as the second lead track. The B-side, is also a Japanese version of the original song included on their third Korean mini-album Lupin, used also as second lead track.