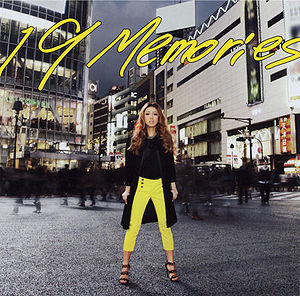 "19 Memories" is the 12th single released by Kato Miliyah. The title track was used as the dwango CM song and the theme song for the dorama Ryuuha-R. The song was influenced by Amuro Namie's song, "SWEET 19 BLUES" and also uses the song as a sample. Like Amuro back in 1996, Kato is now 19 and dealing with the struggles of becoming an adult and leaving her childhood behind. The single reached #16 on the Oricon charts. It sold 12,445 copies in the first week and 24,285 copies in total. The title song has been certified Double Platinum by the RIAJ for Chaku Uta downloads of over 500,000, and Platinum for Chaku Uta Full downloads of over 250,000.