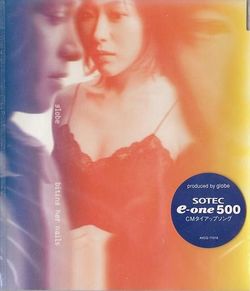 "biting her nails" is globe's 19th single. The title track was used as a theme song for the SOTEC e-one 500 commercials. It was released after appearing on the album CRUISE RECORD 1995-2000. The single reached #13 on the weekly Oricon charts and charted for five weeks, selling 56,000 copies.

There are currently five versions of "biting her nails" to be found in globe's discography.

biting her nails (BLACK SEBBATH moombahton re
work)
Found on globe's fifth remix album, house of globe, as track #10. This track is remixed by BLACK SEBBATH.