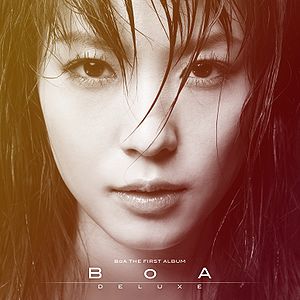 BoA is the English debut album released by BoA. The album was produced by international producers Sean Garrett, Bloodhsy & Avant, Henrik Jonback, Brian Kennedy and Adrian Newman. This album marks her debut in North America. In Japan, it was released in a pack with her second Japanese best album, BEST&USA. Although the album did very poorly in the U.S. (where it charted at #127 on Billboard Top 200 chart selling only 8,000 copies total) it reached #2 on the Oricon chart in Japan (but only as part of a Japanese best album, 'BEST&USA) , and #1 on Hanteo Pop chart in Korea. The album was re-released six months later as BoA DELUXE. The new edition comes with two new tracks, a radio edit version of "Energetic", and a different cover and failed to chart.