Only One (BoA album) 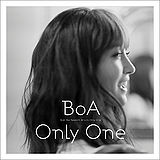 Only One is BoA's seventh Korean album. It was released in two versions, a limited and regular. Limited edition comes housed in a special packaging including a 48-page photobook, while the regular edition includes a 24-page photobook. It was her first release in Korea in two years since her previous album released in 2010. The tittle track was used as first lead track and "The Shadow" was used as second lead track.