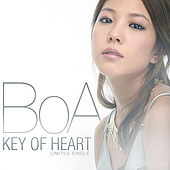 There are five versions of "KEY OF HEART" to be found in BoA's discography. These different versions (listed chronologically) are: