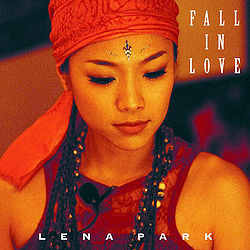 "FALL IN LOVE" is the Japanese debut single released by Lena Park. It was released on the same date as her Japanese debut album another piece. The single includes three language versions of the same song. The Korean version, titled in Japanese "Tsuki" (月), was later retitled and included on her fifth Korean album as "Dahl" (달). The title of the original Korean song "Kume" was translated as "Yume no Naka de..." (夢の中で) for the single release, however for another piece release was translated as "In Dreams". The single reached #172 on the weekly Oricon chart, and charted for four weeks.