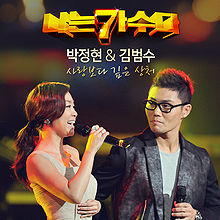 "Sarangboda Gipeun Sangcheo" is the second collaboration digital single released between Lena Park and Kim Bum Soo. The single features the song originally included on Lena's debut album piece with Kim Bum Soo's vocals replacing Yim Jae Beum. The song was first performed by the two singers on the TV show I Am A Singer. The song is a cover of Yim Jae Beum's song of the same name from his second studio release Desire To Fly.