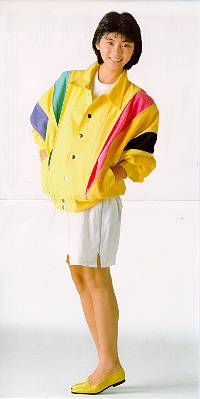 Fukunaga Satomi (福永恵規) was a Japanese pop singer, tarento, and was member #11 of the former idol group Onyanko Club.

Fukunaga first joined Onyanko Club in 1985 when she passed the autition on the Jyoushikousei Special. She was featured as lead vocals on the early Onyanko Club singles, including the debut single "Sailor Fuku wo Nugasanaide".

In 1986, she made her debut as a solo singer with the single "Kaze no Invitation" that was #1 on the weekly Oricon charts. Later that year, she graduated from Onyanko Club at the final concert of the Zenkoku Juudan Concert "Onyanko PANIC" tour (but performed later at the final Onyanko concert in 1987). She also appeared in the show Sukeban Deka III as the character Leia, the bodyguard of the main character.

She retired from the music business in 1988 due to her physical health deteriorating. She worked as an OL after that and later married in 1994.