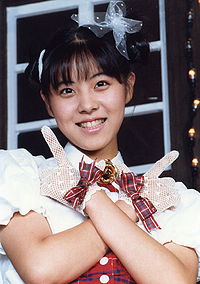 Kaise Noriko got her start in 1985 when she won the grand prix at the Miss Kappapia Contest. A year later, she became the forty-first member of the idol group Onyanko Club when she won the grand prix for the Miss Seventeen Contest on August 10, 1986. Kaise participated in the group's songs and the TV show Yuuyake Nyan Nyan. There was plans for Kaise to become a member of Ushirogami Hikaretai but it didn't happen. Kaise graduated from the group at their last concert on August 31, 1987.

After graduating from Onyanko Club, Kaise went onto work as a model and appearing as a model. Later on, she retired from the world of show business and became a automotive industry office lady in the Kanto region. She reunited and performed with other former Onyanko Club members in 2002 on the year-end special FNS Kayousai.