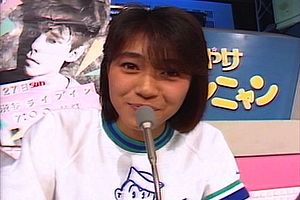 Tomikawa Harumi first got her start when she joined the idol group Onyanko Club after winning the Yuuyake Nyan Nyan-sponsored contest The Scout Idol wo Sagashite! in April 1985. She begin to sing the main vocals on many of Onyanko Club's songs, starting with the single "Osaki ni Shitsurei" in 1986.

After Onyanko Club broke up in 1987, Tomikawa continue her entertainment career by becoming a model and an actress by appearing in several commercials. However, she retired from show business and is currently a marine sports instructor at a resort hotel in Okinawa. She is married and is the mother for one child.