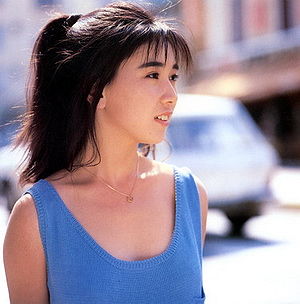 Takai Mamiko (高井麻巳子) is a former a Japanese pop idol singer, actress, and member #16 of the idol group Onyanko Club.

Takai Mamiko first worked at a bicycle that her parents owned. Once in college, she went to the College of Arts in Tokyo while her sister was a dancer on the show Yoru no Hit Studio. Wanting to be like her older sister and wished to be part of the world of show business, Takai auditioned and passed the Idol wo Sagase audition for Onyanko Club in 1985 to become the 16th member of the group. Later on the year, Iwai Yukiko and her formed the subgroup Ushiroyubi Sasaregumi and released their self-titled single that same month.

In 1986, Takai released her first single, entitled "Cinderella-tachi e no Dengon". She later graduated from Onyanko Club in March 1987 and went on to star in many doramas. In 1988, she married her producer Akimoto Yasushi and suddenly retired from show business. She gave birth to a daughter in 2001.