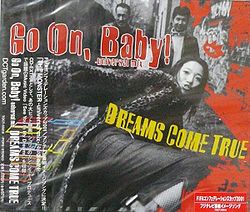 "Go On, Baby! -universal mix-" is the thirtieth single released by DREAMS COME TRUE. The title track was used as the theme song for the Fuji TV coverage of the 2001 FIFA Confederations Cup. It was released after appearing on the album THE MONSTER -universal mix-. It reached #25 on the Oricon charts and charted for two weeks, selling 19,000 copies.

There are currently two versions of "go on, baby!" to be found in DREAMS COME TRUE's discography.