"Pretty Girl" is a Korean pop song released by KARA and included on their second mini-album Pretty Girl. It was used as the lead single. The choreography for "Pretty Girl" became instantly popular amongst netizens and the public, especially a certain part of the dance that had KARA raise both hands above their heads and wave their hands back and forth to the "Ye, ye, ye, ye" segment of the lyrics. 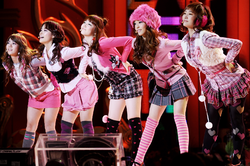 There are currently three versions of "Pretty Girl" to be found in KARA's discography. These are: