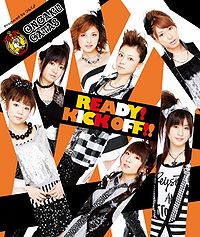 "READY! KICK OFF!!" is the fourth single (first indies single) released by Ongaku Gatas. The single was sold only during Ongaku Gatas Live Tour 2010 Haru ~Gatas Ryuu~; therefore, it was not counted on the Oricon charts.