From generasia
(Redirected from Beat)
Jump to: navigation, search 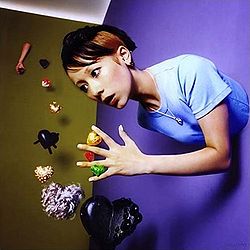 BEAT is Kimura Kaela's fourth single. During this single's promotion, Kimura got a more "punk" haircut were the sides of her head were cut short and dyed colors like red and purple. This single reached the seventh position on the Oricon and stayed on the charts for seven weeks.

There are three versions of BEAT to be found in Kimura Kaela's discography (listed chronologically). These different versions are: