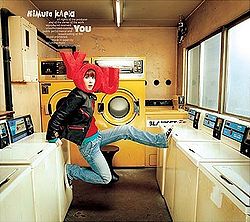 "You" is Kimura Kaela's fifth single. The title song was used as the Kit Kat Bar CM song, and was later replaced by Kimura's song, "Circle". "Pioneer" was used as the Pino Eskimo CM song. The single reached #17 on the weekly Oricon charts and stayed on the charts for seven weeks.

The music video features Kimura jumping back in fourth in between a black and white world play with her band and a colored world with lots of bright colors and strange animals.

There are currently two versions of You to be found in Kimura Kaela's discography.