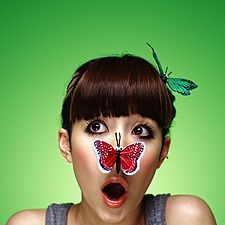 There is currently a total of two versions of "Butterfly" to be found in Kimura Kaela's discography. These versions are: