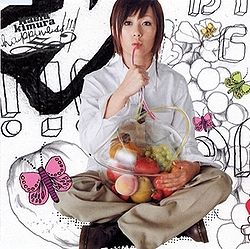 "happiness!!!" is the second single released by Kimura Kaela. The title track was used as the CM song for the Rohto's Sesera lipcare products. The single reached #11 on the weekly Oricon charts and stayed on the charts for a total of eleven weeks. The single sold a 20,654 copies in its first week and has since sold a total of 41,357 copies.

Kimura performed an acoustic version of "happiness!!!" on the Mezamashi TV program on 2005.01.10.

The music video features Kimura riding in a yellow school bus playing with her band and having a good time with a group of friends.

The concept of the video was later copied by Chinese pop singer Rainie Yang.

There are currently three versions of happiness!!! to be found in Kimura Kaela's discography. These versions are:

happiness!!!
Found on the "happiness!!!" single as track one, and track four on the "KAELA" album. This is the version set to the PV.

happiness!!! (Instrumental)
Found on the "happiness!!!" single as track three. This is the standard version without the vocals.

happiness!!! (4YOU Live)
Found on the "KAELA KIMURA 1st TOUR 4YOU" DVD as track sixteen.