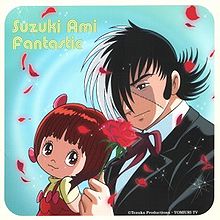 "Fantastic" is the 21st single (seventh avex trax single) released by Suzuki Ami. This was released in three different versions: a CD+DVD edition, a CD only edition, and a one-coin CD edition. The one-coin edition was a limited release, being only available until March 2005. The limited first press of the CD+DVD and CD only editions comes with a Black Jack sticker. When the title song was put on the album "CONNETTA", to fit with the collaboration theme, was renamed as "AMI SUZUKI joins Harada Ken". The title song was also used as Black Jack's opening theme song from December 5th, 2005 on. This was simultaneously released with the live DVD "SUZUKI AMI AROUND THE WORLD ~LIVE HOUSE TOUR 2005~". The single reached #14 on the Oricon, where it charted for five weeks and sold 20,213 copies.