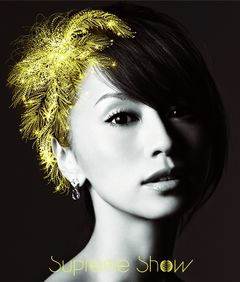 "Supreme Show" is the seventh album (fourth avex trax album) released by Suzuki Ami. It is marketed as her 10th year anniversary album, and is entirely produced by popular electronic musician Nakata Yasutaka of capsule. This was released in three different versions: a CD+DVD edition, a CD only edition, and another CD+DVD edition only available through the mu-mo shop. The mu-mo edition's DVD contents differ from the regular CD+DVD edition. The album reached #16 on the Oricon, where it charted for four weeks and sold 13,094 copies.