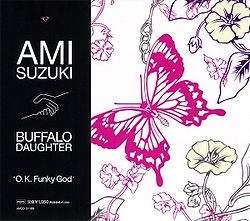 "O.K. Funky God" is the 24th single (10th avex trax single) released by Suzuki Ami. It is her first joint collaboration single, this time working with Buffalo Daughter. This single is the first released in three weeks, one after the other, "Peace Otodoke!!♥" and "Sore mo Kitto Shiawase" are the other two. This is a limited release having only 13,000 copies. The title song was used as Fuji TV's "Sakigake! Ongaku Banzuke" theme song. The single reached #47 on the Oricon, where it charted for two weeks and sold 3,699 copies in the first week.