FIVE is the fifth Japanese album released by SHINee. It was released in four versions: a limited CD+Blu-ray edition "A", a limited CD+DVD edition "B", a regular edition, and a special CD+DVD limited edition only sold through the group's Japanese fanclub SHINee WORLD J. 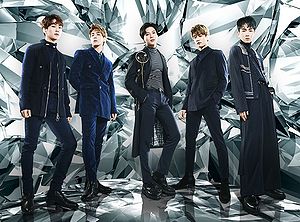