THE FIRST is SHINee's first Japanese album. It was released in three versions : A regular CD-Only edition coming with a bonus track, "Stranger", which was used as theme song for the drama Strangers6, a trading card (first press only, one randomly chosen from 5 kinds), a 44-page photobook and a B2-sized poster (first press only); a limited CD+DVD edition containing a 2012 desk calendar and a 68-page photobook; a limited SPECIAL BOX edition containing, in addition to the CD and the DVD, a "PLAYBUTTON" player (including the whole album), a bigger 2012 calendar, and an 88-page photobook. DVDs for each limited edition contain different tracklists.

The album includes five songs from their first three Japanese singles, "Replay -Kimi wa Boku no everything-", "JULIETTE" and "LUCIFER", as well as the Japanese versions of their Korean songs "Amigo" and "The SHINee World", and five new songs. A Korean version of the bonus track "Stranger" was later released on SHINee's fourth Korean mini-album Sherlock.

Both limited editions and the regular edition's first press contained an application ticket to attend the "SHINee JAPAN 1ST ALBUM 「THE FIRST」 SHOWCASE LIVE" at the Tokyo International Forum Hall A on December 24th, or win other goodies. 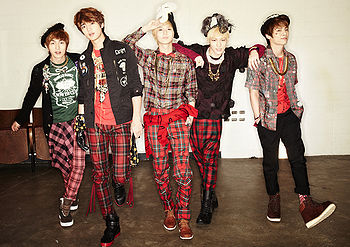