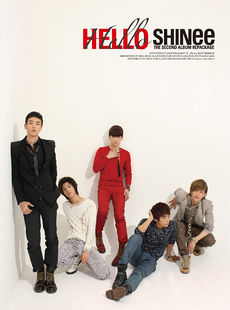 LUCIFER is SHINee's second Korean album. It was released in two editions each of them released on different dates, with different covers but the same tracklist. First press edition of the Version A includes a random photocard. The last track, "Sa.Gye.Hu (Love Still Goes On)" is a second part to the song "Sa.Gye.Hu (Love Should Go On)", included on their debut mini-album Noona Neomu Yeppeo (Replay).

The album was re-released as a repackaged album three months later titled Hello, and including three new songs "Hello", "Hana (One)" and "Get It". The new title track was used as lead track.