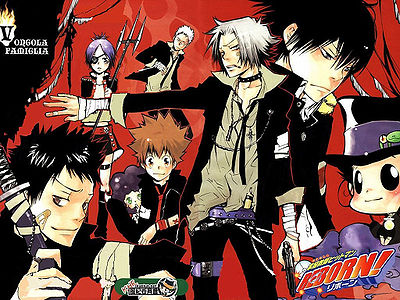 Katekyo Hitman REBORN! (家庭教師ヒットマンREBORN!; Home Tutor Hitman Reborn), often shortened to REBORN!, is a shonen manga created by Amano Akira. The series originated as a one-shot that ran in Shueisha's Weekly Shonen Jump in 2003. Because of its popularity, Amano reworked it into a weekly comic, which began its run on April 4th 2004. The series was licensed by Viz Media in 2006, and released the first volume on October 3rd of that year under the Shonen Jump Advanced manga-line.

An anime adaptation of the series was created by Artland. The series debuted on TV Tokyo on October 7th 2006, and is ran for a total of 203 episodes ending its run on September 25th 2010. Even though the anime version is not licensed in North America, the weekly shows are available for streaming on Crunchyroll. Additionally, the series has received several video games and a series of light novels.

Sawada Tsunayoshi is a pretty normal middle school student. He is not really good at much and he doesn't recieve very good grades, and because of this he is known by his classmates as "Dame Tsuna" (だめツナ; No Good Tsuna). One day a baby dressed in suit arrives at Sawada's home, and introduces himself a a legendary mafia hitman, Reborn. He then tells Sawada that he was chosen to become the boss of the Vongola Family, seeing as he is the great-great-great grandson of "Vongola I". Reborn was sent from Italy to Japan by "Vongola IX" to train Sawada. To help him get over his fears, Reborn shoots Sawada with a "Dying Will Bullet", which causes him to become reborn and helps his strength come out and lets him correct his last regret before he was shot.

Not long after his training begins, different mafia members come to fight Sawada for the title of Vongola. Through a series of battles, he gains a mafia family, which contains his six guardians. He then sees he has the power to become a mafia boss, and he does all he can to protect his new friends.

The music for Katekyo Hitman REBORN! was composed by Sahashi Toshihiko, and produced by Pony Canyon.

Amano Akira first started to write the REBORN! story in the early 2000s. Her early drafts of the series appeared in several seinen manga magazines. In 2003 Amano released a one-shot of her refined series in Shueisha's Weekly Shonen Jump. The one-shot was so well received that she was able to turn it into a weekly comic, which began its run on April 4th 2004. There have been 26 volumes of the manga released in Japan.

The series started off as more of a slapstick comedy, comprised of a bunch of strange and unusual characters. Amano likes to refer to her cast of characters as "a bunch of weirdoes." Since volume eight of the series (the introduction of Rokudo Mukuro), the series has become more action orientated. Because of this change, the series has been noted as being a better shonen series.

Outside of Japan, the series has also been licensed in several English speaking countries by Viz Media. It was licensed by Viz in 2006, and they released the first volume on October 3rd of that year under the Shonen Jump Advanced manga-line. There are currently ten volumes released through the UK, US, and Canada. The series has also been licensed by Tokyopop in Germany and by Glénat in France.

An anime adaptation of the series was created by Artland, and is directed by Imaizumi Kenichi. The series debuted on TV Tokyo on October 7th 2006, and is still running weekly, currently in its sixth season. The series has not been licensed outside of Japan, although the North American-based anime company Funimation exercised a power of attorney to remove fan subbed episodes of the REBORN! anime from the Internet, sending cease and desist notices to all groups working on the series. Starting on March 21st 2009, new streaming episodes of the Japanese dubbed series are available on Crunchyroll, within an hour after its original showing in Japan.

In addition to the weekly Katekyo Hitman REBORN! manga installments, there have been monthly light novel chapters published in Shueisha's Jump Square magazine since 2006. The novels are written by Koyasu Hideaki and illustrated by the series manga-ka, Amano Akira. These storys tend to follow the other members of the series instead of the main members of the Vongola Family.

Starting in 2007 after the weekly episode, there was also a radio show that aried, ReboRaji! ~Bucchake Ring Sodatsusen~. The show was hosted by Ichinose Hidekazu (Gokudera Hayato's seiyuu) and Inoue Suguru (Yamamoto Takeshi's seiyuu). The show however ended on June 30th 2008. A month later another show, ReboRaji! Bucchake Namimori Dong☆Dong started in its place. This show is hosted by Ichinose Hidekazu, Inoue Suguru, and Iida Toshinobu (Rokudo Mukuro's seiyuu).

The Katekyo Hitman REBORN! cast first made their video game debut in the Nintendo DS game, Jump Super Stars. The game is a battle game (similar to the Super Smash Bros. series), but instead of being made up of Nintendo characters, it was made up of characters from various Weekly Shonen Jump series. In 2007, the REBORN! cast released their first vary own game, Katekyo Hitman REBORN! DS Shinuki MAX! Vongola Carnival!! also for the Nintendo DS. Since then the series has spawned many video games, which are for a variety of gaming platforms.