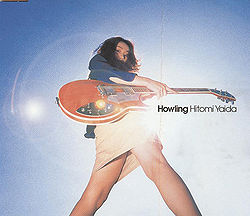 "Howling" is the first indie single released by Yaida Hitomi. A year prior to this release Yaida released the single, "nothing," under the name SEESEE and the label Bandai Music Entertainment. This is Yaida's first release on the indie label AOZORA RECORDS and soon after it's release she signed with the major label, EMI Music Japan.

This single reached #50 on the Oricon weekly charts, and stayed on the chart for a total of nine weeks, selling 27,000 copies.